The care of the harvest

For the winegrower in Châteauneuf du Pape as for the winegrower in Côtes du Rhône, producer of white wines as producer of red or rosé wines, the date of the harvest is strategic and therefore decided after several passages in the plots in order to harvest the grapes at their peak. optimum maturity. Whether the fruit is picked by hand, as in Châteauneuf du Pape, or using a harvesting machine, producers must harvest quickly and well. Indeed, the slightest climatic event can have dramatic consequences on the work of a whole year. For the winegrower, manual harvesting is compulsory in the Châteauneuf du Pape appellation, this means that he can only work with grapes in perfect sanitary condition, the first guarantee of the quality necessary for the production of a great wine. Our wine cellar was designed by the producers of the Mousset family in such a way that gravity is used to transport the grapes from the reception dock to the vats, without being mistreated or damaged by various mechanical manipulations. 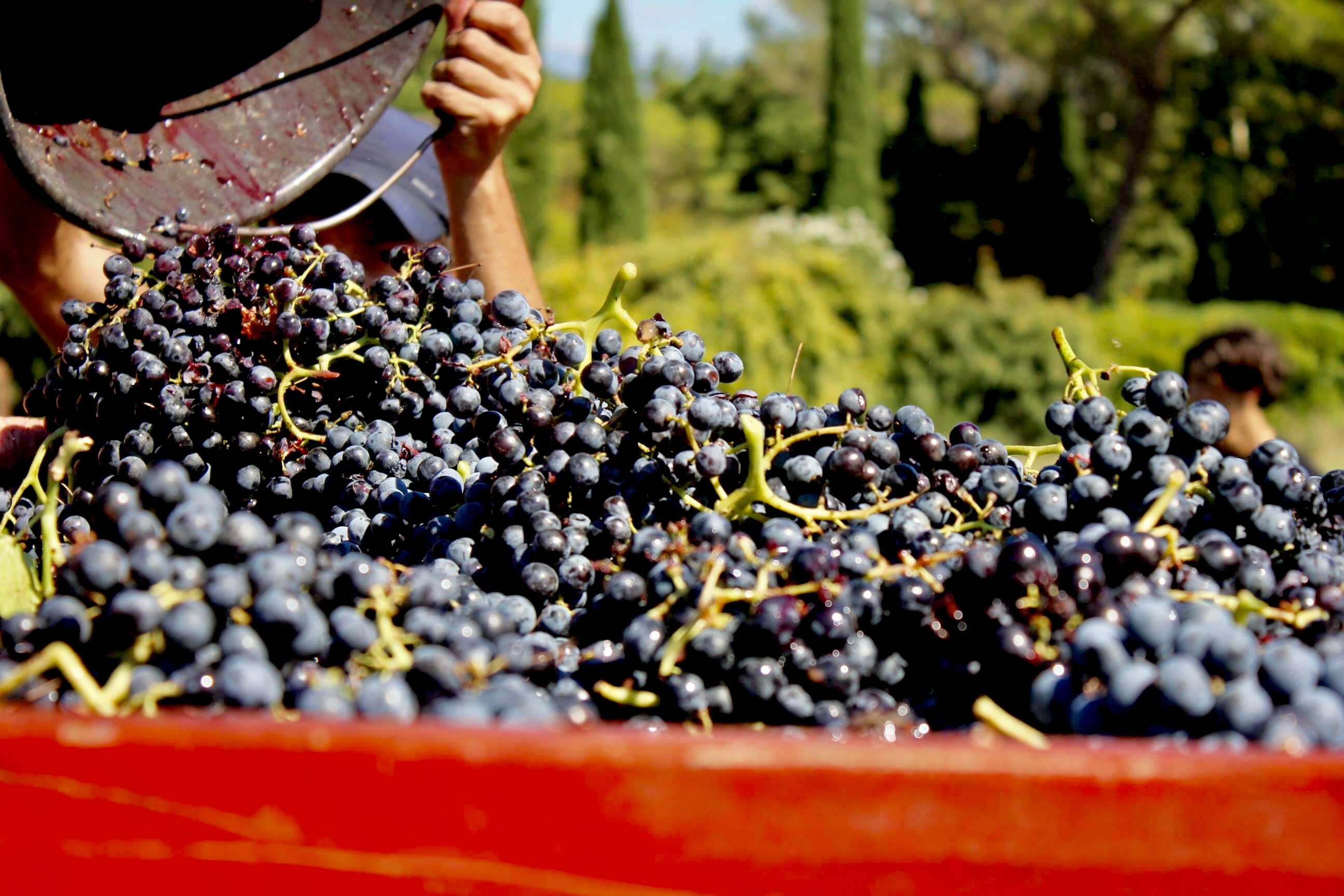 Upon arrival, the bunches intended to produce the red wines of Châteauneuf du Pape are de-stemmed, i.e. the stem is removed, which could bring herbaceous flavors to the wines produced. The grains are then crushed: they are slightly opened in order to let the first juice escape.

Then they are distributed in the vats according to their origin and the appellation for which they are intended.

The vats of Châteauneuf du Pape are not mixed with the vats of Côtes du Rhône. By piling up, the grapes will continue to extract their juice. By bathing in it, the yeasts which are naturally on the skins will begin their work, that is to say transform the sugar contained in the juice into alcohol. This phenomenon will trigger a rise in temperatures, which any producer must be able to control quickly for several reasons:

- beyond 40°, the yeasts die and therefore the fermentation stops.

- too high temperatures deteriorate the aromas and colors.

In order to avoid this kind of problem, our tanks are equipped with a refrigeration system, which we can trigger as soon as the 30° threshold is reached.

For all producers, the vatting time for red wines varies according to the appellation. This can range from about a week for local wines, 10 to 15 days for Côtes du Rhône, to 15 to 25 days for Châteauneuf du Pape. During this period, we do “pumping over”: the juice is pumped from the bottom of the vat to be released on top. It is an essential operation for all producers to obtain a good homogenization, a good extraction, and it allows that the "hat" does not dry out.

Winemakers call the solid parts of the grape (skin and seeds) that float on the surface a “cap”, because it protects the juice from oxygen and bacteria in the air. Above all, it must not dry out: on the one hand to remain airtight, on the other hand to be able to be pressed at the end of vatting.

After pressing, this hat is called “marc”.

Grape marc vinified in Châteauneuf du Pape can be distilled to obtain Marc de Châteauneuf du Pape. Some producers can have their own marc distilled, as in Châteauneuf du Pape, other winegrowers send them to an industrial distillery. Fermentation stops naturally when the sugar level is less than or equal to 2 grams per liter of wine. The wine is then drawn and the marc pressed, and today free run wine and press wine are mostly blended. A second fermentation can then start: the malolactic fermentation. It lasts between a week and a month. This will be followed by rackings which allow a natural clarification of the wines. Depending on the choice of the producer in certain AOCs, or according to the rules of these AOCs, wines intended for aging, such as the red Châteauneuf du Pape, are aged in oak casks, in demi-muids or in vats for 6 to 18 months. , see more; the others will spend the winter in storage vats before being bottled the following spring.

Not all Châteauneuf du Pape producers necessarily make white Châteauneuf. They are therefore relatively little known and rather rare wines. It is easier to find Côtes du Rhône and IGP Vin de Pays de Méditerranée vinified in white from the winegrowers of our region.

The grape varieties used in all cases are white grape varieties. The grapes are destemmed and pressed as soon as they arrive at the cellar. The pneumatic presses used today by the majority of producers allow extremely gentle and precise pressing. This avoids, for example, crushing the pips, which would give very herbaceous tastes which are not welcome in our wines. Whether to make Châteauneuf du Pape or another white wine, the juice is then decanted.

For winegrowers, this operation consists of letting the must rest for 12 to 24 hours; it will then clarify, and the alcoholic fermentation can then take place after racking, in a clear juice, rid of its impurities. Here again, the temperatures must be carefully monitored by the producers, and the thresholds not to be exceeded are even lower than for red wines: 18 to 20° instead of 28 to 30°. This is one of the reasons why the fermentation time is longer. Indeed, whether it is AOC Châteauneuf du Pape wines or another appellation, yeasts work less quickly at low temperatures. Thus, this period can last up to twenty days. It will stop naturally, as for the reds, when the sugar level is less than or equal to 2 grams per litre. As many winegrowers do in white winemaking, the malolactic fermentation will be blocked. Our wine is then stored for the winter in stainless steel vats and will be bottled in the spring following the harvest. Depending on the choice of each Châteauneuf du Pape producer, the whites are sometimes aged in barrels. 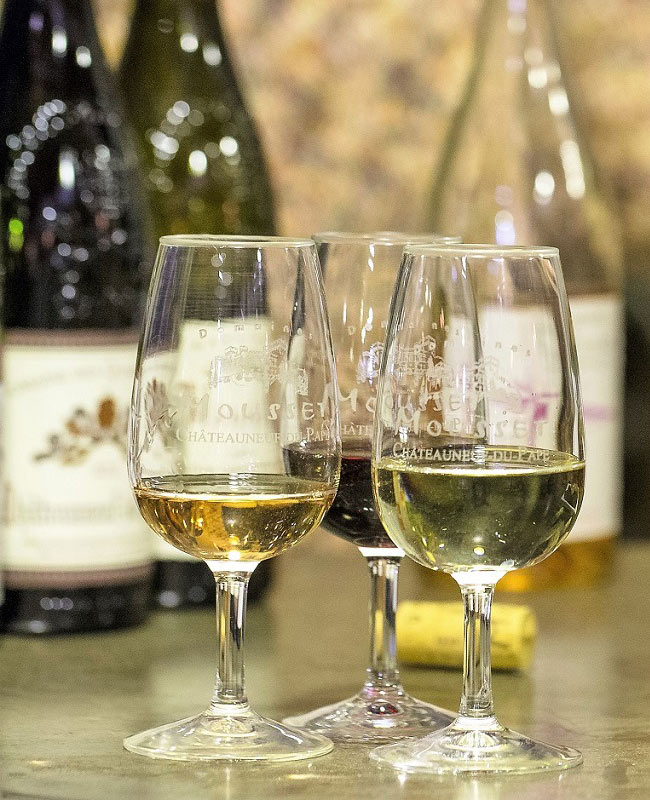 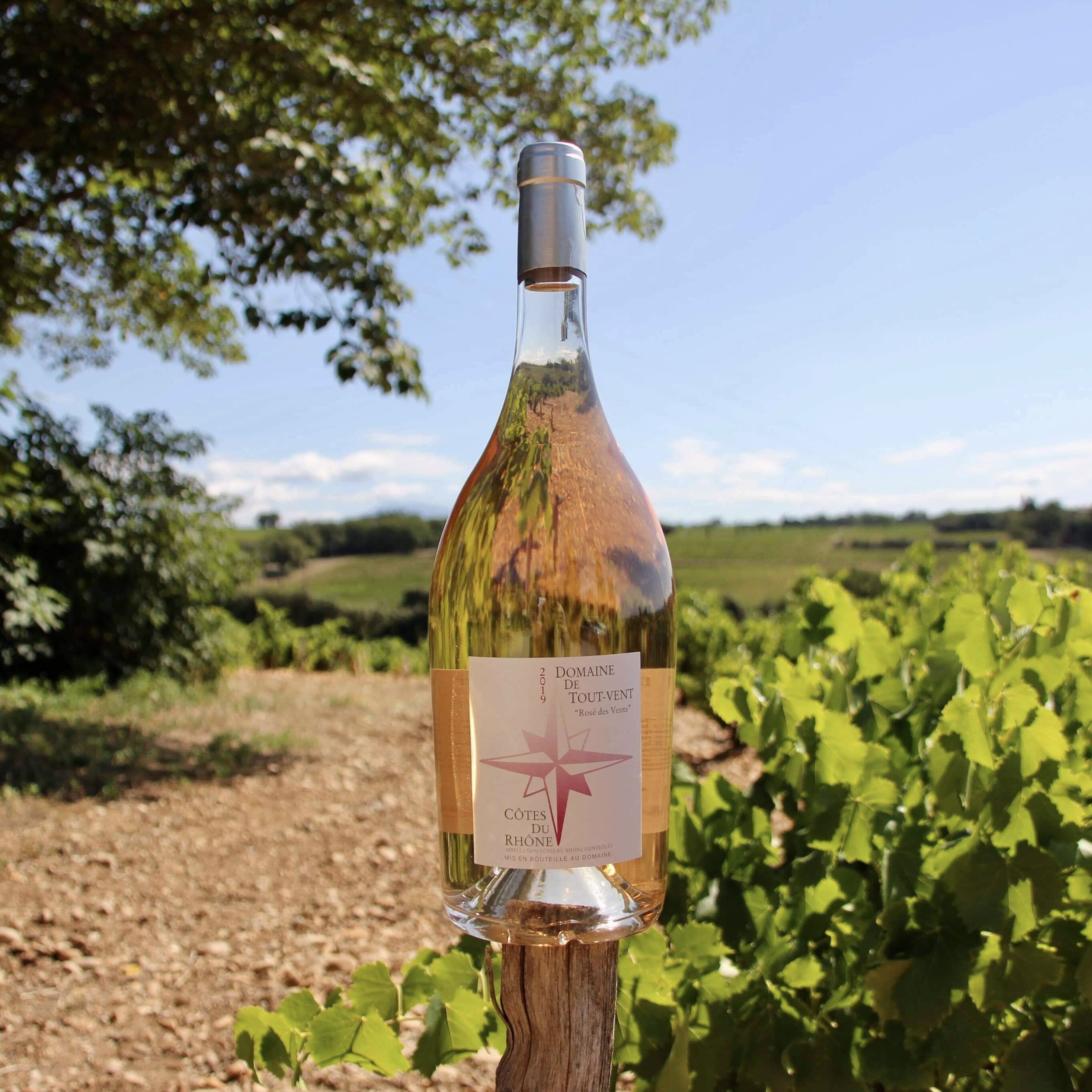 There are two main processes for making a rosé, depending on what the producer is looking for: “bleeding” rosé or “direct pressing” rosé.

Our rosé wines are said to be “direct pressing”. The process is the same as for the whites: the winemaker destems and presses the grapes as soon as they arrive in the cellar. The juice, called must, is decanted and vinified as for a white wine, same temperatures, therefore same duration. Our wine is then stored for the winter and will be bottled in the spring following the harvest. Rosé wines are very rarely aged in barrels. There is no rosé Châteauneuf du Pape, it is very clearly stipulated in the specifications of the AOC

By continuing to browse our site, you accept the use of cookies and other types of tracers used to provide you with products, services and content tailored to your needs. This site uses cookies for statistical and advertising purposes.